Abraham and The Art of Shared Ancestry:
A Conversation with Exhibit Artists & Local Experts.

The Islamic Arts Society participated in a panel discussion with leaders of Abrahamic faiths in a zoom meeting organized by the Interfaith ministry of Greater Houston.

The event is part of the exhibition, titled “ABRAHAM: Out of One, Many” that is touring the United States and is organized by CARAVAN.

Today’s climate of increasing prejudice and stereotyping, which has resulted in the rise of tribalism, populist nationalism, antisemitism, and continuing anti-Muslim sentiment, needs to be counteracted by creative initiatives that are based on what we all hold in common.
It is in this context that Abraham’s life, a spiritual figure of distinct significance within the three primary monotheistic faith traditions, Islam, Christianity, and Judaism, has much to teach us about welcoming and embracing the “other.” In these three faith traditions, whose followers are referred to a “children of Abraham,” the figure of Abraham is seen as a model of hospitality – of welcoming the “stranger” and embracing the “other.”

This timely exhibition, titled “ABRAHAM: Out of One, Many” (playing off of the Latin motto “E Pluribus Unum” / “Out of many, one”), focuses on what we can learn from Abraham’s story about living together more harmoniously. For this exhibition, three celebrated Middle Eastern contemporary visual artists from the faith traditions of Islam, Christianity, and Judaism have each created five paintings that interpret Abraham’s life and faith journey for us today, serving as a guide toward creating cultures of peace, harmony, justice, and healing – all as descendants of a shared heritage.

What can Abraham teach us today toward freeing our world from sectarian strife? That is the question this strategic exhibition attempts to answer.

The exhibition premiered in Rome, Italy at St. Paul’s Within the Walls from May 3-June 9, 2019, and was then showcased in Paris, France, and Edinburgh, Scotland over the summer of 2019. In the fall of 2019, the exhibition began touring the USA through 2021. 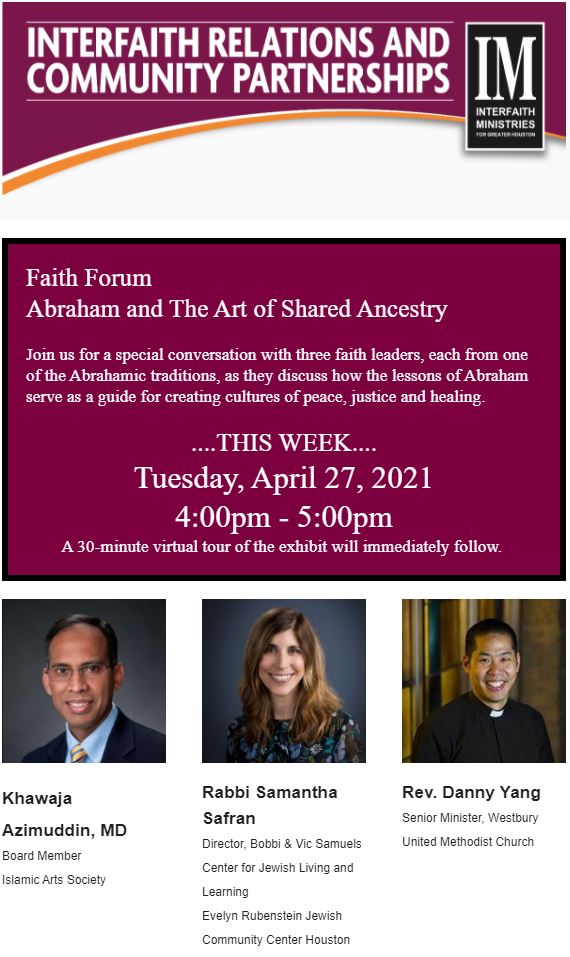