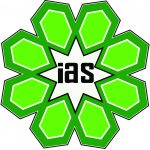 The Islamic Arts Society announced the winners of the first ever “Art for The Love of Prophet Muhammed” (pbuh) contest on the night of Isra and Meraj on the 10th of March 2021. A first of its kind, the competition generated world wide attention and we received over 200 entries from 5 continents and 22 countries. A panel of three judges selected the winners and we present them here. Please join us in congratulating the winners.

Medium: Made on canvas with original silver leaves, Mixed Media. Painting with calligraphy brushes 12 ft by 8 ft it is paneled, in three panels Blue sky color scheme shows The Prophet SAW is the reason for the creation of this universe. 99 names of the Prophet PBUH are written along with Salawat or Durood in circles in Tuluth script and the name Muhammed encircles these salawat in red kufic font. 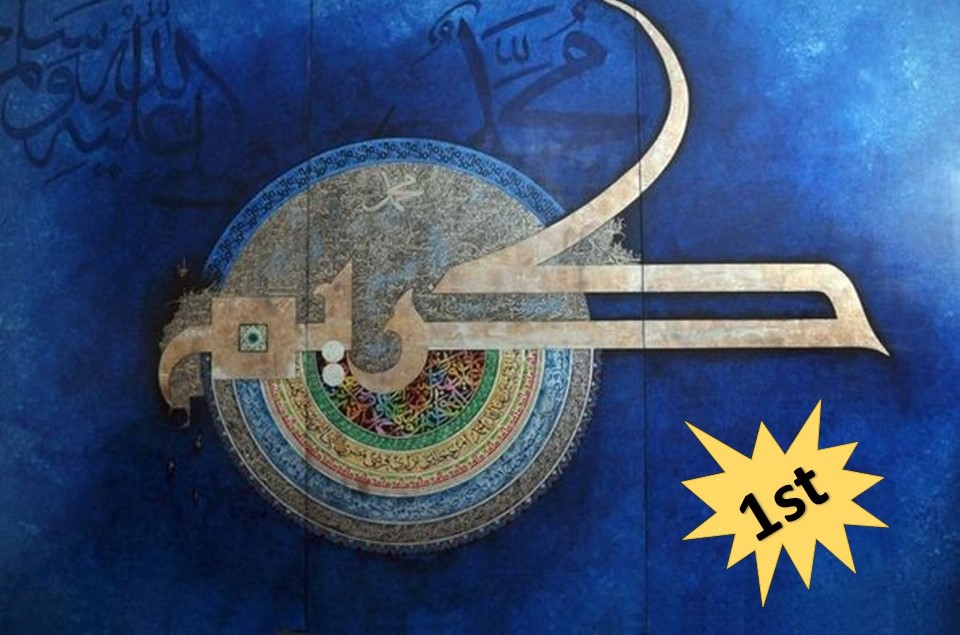 Tusif Ahmad, Australia.
Title: The 6 phases of the life of Prophet Muhammad (Peace be Upon Him)

Description: These six pieces of paper cut art depict various phases of the life of Prophet Muhammad (Peace be Upon Him) spanning 63 years. THE FIRST PHASE: In the first piece of this artwork depicts a mountain in the center (the cave of Hira where revelation happens) . A path from it leads to a giant flower (an attempt to depict the persona of the Prophet. There are thorns on the various vines around the mountain depicting the condition of the world The birds around the flower symbolize the followers (Ummah) of Prophet. Two pillars, symbolizing the throne of Allah, The lower part of the artwork shows grazing sheep as the Prophet Muhammad (PBUH) was a shepherd. THE SECOND PHASE The topic of the second artwork is the Prophet’s (PBUH) ascension to the heavens. In the center is shown an animal, a horse with wings known as Burraq, Above Burraq are seven semicircles, each portraying a Heaven that the Prophet (PBUH) visited. The prophets he met in this journey on each Heaven are mentioned in golden paper. Burraq and the Seven Heavens is glittered with stars and galaxies. Above the Heavens on the left side is written one of the names of Allah. The Possessor of Glory and Honor, The Prophet (PBUH) was gifted with the five obligatory prayers during this Night Journey. The verse with this command is written around the great attribute of Allah On the right side of the artwork is the verse “We have not sent you ˹O Prophet˺ except as a mercy for all the worlds.” THE THIRD PHASE In the third piece of this artwork shows the Kaaba in the bottom half of the artwork, and pilgrims around it, THE FOURTH PHASE In the fourth piece of this artwork is about HiJrah THE FIFTH PHASE In the fifth piece of this artwork focuses on the Quran, THE SIXTH PHASE In the sixth piece of this artwork, focuses on the resting place of the Prophet 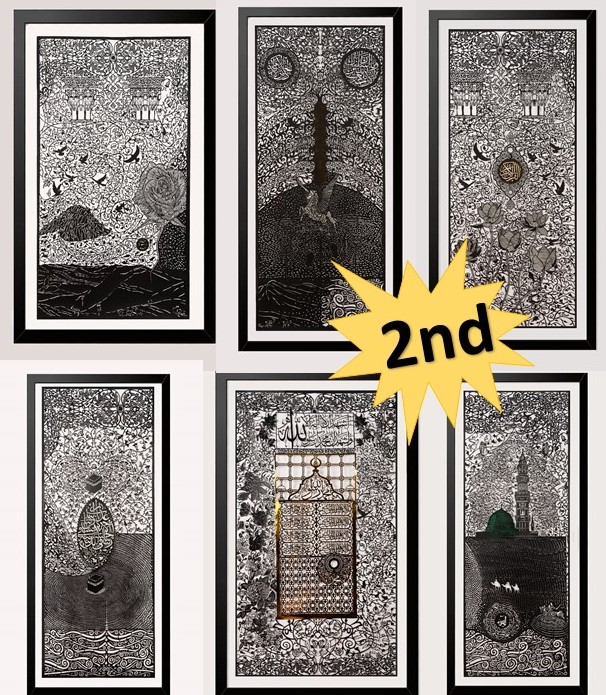 Mixed media, calligraphy and illumination This painting depicts the love and kindness of our great Prophet Muhammad (PBUH) and the message that he spread in this world. The golden color shows the respect we hold for him and his purity in every action. The flowers in the painting depict the love to our Prophet PBUH. 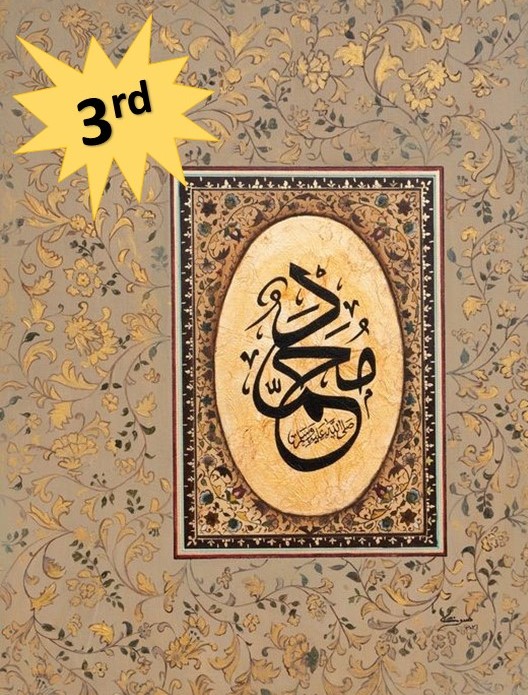 For Those Who Made It To Final Round

Those Who Made It